Our guest: Alborozo is an author-illustrator based in South London. He has provided illustrations for numerous magazines and books; his own works include The Acrobat and The Colour Thief –both released in 2014– and Good Night, Firefly, released June 2, 2015 by Henry Holt.

My dad reading Winnie the Pooh to me at bedtime. The stories are timeless, gentle and beautiful. With hindsight, the illustrations were the seeds of knowing what it was I wanted to do with my life. Dad also did the voices and I suspect I haven’t laughed as hard in my life as I did when he did the ‘Help! Me, Piglet’ line.

I’d like to say Pooh, but I suspect that’s the character I’d like to identify with. I think it’s probably more accurate to say Piglet. He’s well-meaning and a bit of a homebody, but also prone to a getting into a flap.

Also, if my home flooded I think my first instinct would also be to climb into an open umbrella and spiral quietly through the door.

Illustrator is an easy one, and if you can’t guess by now it’s E.H. Shepard. His drawings are everything I aspire to: Quick, loose,

atmospheric, and instantly convey the scene and character in the most perfect way.

If I can just drop one more illustrator in here, then Fred Blunt (right). I seriously doubt if an illustrator has existed that produces work as funny, bright, joyful and as astonishingly accomplished as him.

Author is a bit trickier. I’ll go with someone a bit more contemporary and say Shaun Tan. Basically I’m not sure anyone working today can really touch him. He’s the real deal. Author and illustrator with huge talent in both areas. A genius. And that’s a word that’s much overused. I also admire the way he seems to pretty much keeps himself to himself and just makes his books.

So many to choose from! Off the top of my head I’ll go for E.H. Shepard, Tomi Ungerer (left), Piglet (although I suspect he’d be too nervous to come), my two favourite people from Walker books (they know who they are) and Sally from Holts. I know that’s six but Piglet might bail. The publishing choices are because I know they’d genuinely enjoy the company.

I can’t exactly comment from my own books, but what I want to see is something new. Or at least an attempt at it. The story shouldn’t be afraid of tackling any topic and even the way the 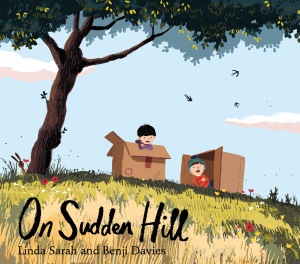 language is used, which I feel is very rare.

There is an author here called Linda Sarah (right). She should write every book I think. Her use of language is vibrant, new and exciting and her ideas are just beautiful.

As for illustration, now that’s a knotty one. There are so many areas where certain forms of illustration work better than others or are more appropriate. What I like to find is where an illustrator has been given the freedom to create what is right for the book. So much illustration is dictated by what is considered ‘commercial’ or contemporary, both fairly arbitrary concepts in the long view. Obviously there have to be some brackets around what an illustrator might produce, but when they are allowed to fly, then you get some incredible books. (I refer you all to Shaun Tan again.)

Probably, for me, what I look for is work I wish I could produce myself. But can’t.

6. IF YOUR OWN WORK HAS A DEFINING CHARACTERISTIC, WHAT WHAT IS IT

I can’t answer that realistically. If I had to say something I think it might be a sense of trying to overcome a fear or insecurity. An idea of trying to do the right thing. In real terms though I think I’m still searching for that characteristic. I think as time goes on, and I produce more books the freedom to express what might become a defining note will happen.

I’d have to say Winnie The Pooh. He’s pretty mellow and just ‘is’. I think in zen he’d be referred to as ‘the unchipped block.’ He likes a full tum and a nice sit on a log. That’ll do me.

I’m trying to avoid saying ‘all of it’.

I’d go back about 7 years and stop myself buying a computer. Speaking strictly just for myself, I feel working digitally can rob my work of a certain warmth and spontaneity that is always present when working traditionally. It doesn’t always of course, but the risk is there. Again, speaking for myself, in the long term I feel that without regular practice with traditional methods you become very rusty with them. I’m currently working very hard to remedy that with the aim to work mostly in traditional methods.

Also, working on the computer gives me headaches.

Don’t ever, ever stop; and draw something, anything every single day. Paul Hogarth told me that, God rest him.

Speaking just with the ‘illustrator’ hat on (it has an ostrich feather in it): When given a text I’ll read it through a few times and then just go for a walk or a drive and have a think. I think what you first ‘see’ when reading a text is the clearest reading to how it will be. Once that ‘feel’ is there, then I’ll start sketching the characters. That tends to be a process of doing each one over and over in sketchbook until I’m confident that I know them enough to put them in any situation and doing anything.

I then get in a huge flap about how on earth I’m not going to ruin my beloved line work by colouring them… At which point my astonishingly patient agent (Vicki) will step in and give me a bit of a slap. She’ll calm my nerves and give me a pep talk.

From that point I produce roughs that are usually to my view what should be published as is. Obviously they’re not and are then sent to the Art Director who gives me their feedback.

I then have a slightly angry huff, followed by an uncomfortable dawning that they’re probably right.
From that point on its headphones on, and off you go.

I think the main thing for me in the process is that I don’t work from my roughs. Whether its digital or traditional, I just go for it fresh. If its not working its either binned or deleted and start again. No ‘undo.’ I like it to be as straight from the hand as possible.