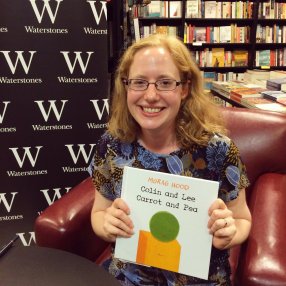 Our guest: Morag Hood is a very patient Edinburgh-based author and illustrator whose first book was Colin and Lee, Carrot and Pea (Two Hoots, 2016). Her second book, coming in 2017 will be When Grandad Was A Penguin, also from Two Hoots. (Photo source)

My mum had a copy of Haunted House by Jan Pienkowski which she kept on a really high shelf so we wouldn’t break all the clever pop-ups and paper engineering. I was always asking for her to bring it down, even though I found it quite scary. 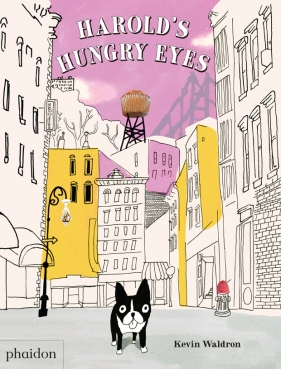 Most recently I would have to say Harold from Harold’s Hungry Eyes by Kevin Waldron. My memory is largely food-based – I remember the particular delicious brownie I had in order to remember the place I went to. My family find this infuriating as they remember things like ‘people’ and ‘geographical locations’ rather than whether I had the 2nd best chocolate mousse of my life.

3. WHO IS YOUR FAVOURITE CHILDREN’S BOOK AUTHOR? ILLUSTRATOR?

Oh I can’t pick a favourite! I am very much a story person and I love clean, clever books where the words and pictures work perfectly together, such as the books of Chris Haughton, Jon Klassen (right) and Oliver Jeffers.

4. IF YOU WERE TO THROW A KINDERLIT PARTY FOR FIVE GUESTS, WHO WOULD YOU INVITE?

Jon Klassen, Chris Haughton (left), Oliver Jeffers, J. K. Rowling, Robin Stevens. (I would ask Chris Haughton to bring along George (left) of Oh no, George! fame so that someone would definitely do something more embarrassing than me.)

A sense of play. 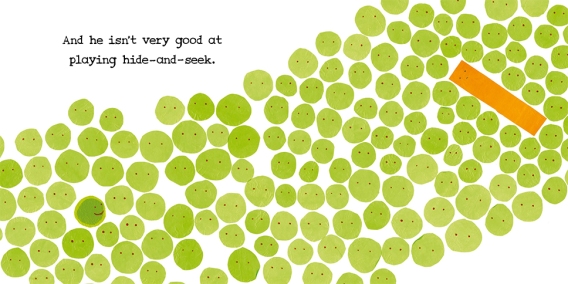 Perhaps the use of humour and the pared-down pictures. I try to keep things as simple as possible.

Billy from The Giraffe and the Pelly and Me by Roald Dahl. A giraffe for a friend, apprehending burglars and my very own sweetshop to run. I don’t actually see how life could be any better.

So much! But I think that is part of the point. Most of the time I like the fact that I am always progressing and getting a better understanding of how I like to work, but every so often I see a piece of my work which makes me really cringe.

9. WHAT IS THE BEST PIECE OF ADVICE YOU WERE EVER GIVEN?

Have fun and enjoy what you are doing. I also find this the hardest piece of advice to follow! When you care about your work and want it to go well it can be so hard to stop and make sure you still have that sense of play going. Particularly when up against a deadline. 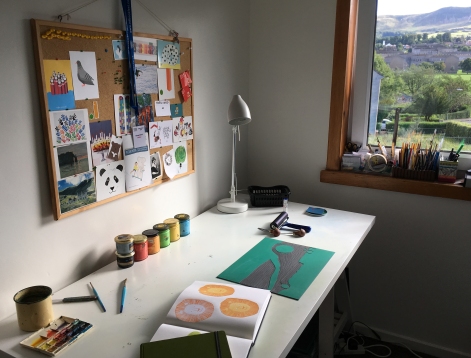 10. TELL US ABOUT YOUR WORK PROCESS.

I tend to go out to a café, museum or zoo and draw and write until an idea emerges. Then I thumbnail words and pictures together until I have a 32 page picture book. I work with my publisher on rough sketches and character drawings before I start the final artwork. How I do this varies – Colin and Lee, Carrot and Pea is a collage of carrier bags combined with acrylic paint and pencil. So far I mainly work with lino print and collage or a combination of the two.

11. WHAT IS YOUR FAVOURITE CHILDREN’S BOOK AND WHY?

Just one?! My current favourites are School’s First Day of School by Christian Robinson and Adam Rex and Alphonse, That is Not OK to Do! by Daisy Hirst. They both have such a strong voice and sense of play whilst having a real truth

and honesty to the characters. They manage to make a building (School’s First Day of School) and monsters (Alphonse) feel as real as any person.

12. TELL US ABOUT A BOOK YOU LOVE THAT, FOR ONE REASON OR ANOTHER, HAS NOT FOUND A WIDER AUDIENCE.

I was about to say Apri la gabbia! by Lorenzo Clereci and Silvia Borando which I bought in Bologna a couple of years ago and has the best punchline, but I am delighted to see it has just been published in English (Editor – By Walker Books) as Open Up, Please! It never fails to make me laugh.