Our guest: R.J. Anderson is a Uganda-born, Stratford, Ontario-based author of middle grade and young adult science fiction and fantasy fiction, including 2009’s Knife (Orchard Books) and its sequels. Her latest, A Pocket Full of Murder, will be released September 8, 2015 by Simon & Schuster.

I started reading early, so I probably wasn’t much older than four when I came across The Monster at the End of this Book in the nursery at Don Valley Bible Chapel. I had a love-hate relationship with that book as a kid, since it always scared me a little: “I know that last time the monster at the end was only Grover, but what about this time…?”

Even before that, though, I remember listening to my father reading The Hobbit to my three older brothers. He had a lovely deep rolling British accent, and he gave all the characters different voices and put real emotion into their dialogue, which is something I also do when I’m reading aloud to my sons.

​Even as a child, I don’t know that I ever read a book and thought, “This character is just like me.” But over the years I certainly met more than a few who were kindred spirits in one way or another; bullied outcasts like Jill Pole, nerdy misfits like Meg Murry, daydreamers like Anne of Green Gables, aspiring authors like Jo March (left)… 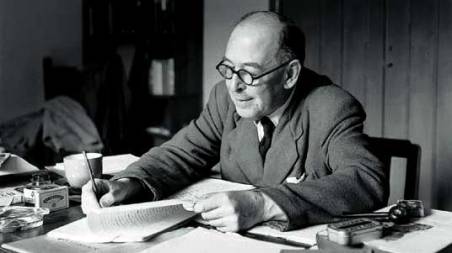 ​I have so many favorite authors, It’s torture to try and choose just one! But you never forget your first love, so I’ll have to go with C.S. Lewis. The Narnia series were the gateway to a lifetime of fantasy reading (and writing) for me; I still re-read them every few years and discover something new every time.

As for illustrators, back in my teens when I still dreamed of becoming an artist as well as an author, I really loved the work of Robin Jacques. But I also adored and admired Tove Jansson’s illustrations for her delightful Moomin books — Moominmamma trying to throw a snowball makes me smile every time.

This is another torturous question, because it could go so many ways! However, a lot of the characters I love best are emotionally guarded and close-mouthed by nature (like Conn from Sarah Prineas’s The Magic Thief), gloomy and/or sarcastic (Puddleglum, Eeyore) or painfully shy (Salome the Little Creep from Moominland Midwinter), so I’m going to go with the characters I think would provide the most interesting and memorable dinner conversation:

Aravis Tarkheena from The Horse and His Boy, Jared Sapiens from Incarceron, Gen from the Thief series (but not his author, Megan Whalen Turner, because all she would say is “Not telling!”), Talis from Erin Bow’s upcoming YA novel The Scorpion Rules, and to throw an author into the mix, C.S. Lewis.

Interestingly enough, I talked about this just recently in a speech I gave at a convention: It’s the presence of hope. Not a naive optimism that everything will always go well or end happily, but the belief that there’s some sort of purpose and value to life, something to be learned from even the hardest experiences. 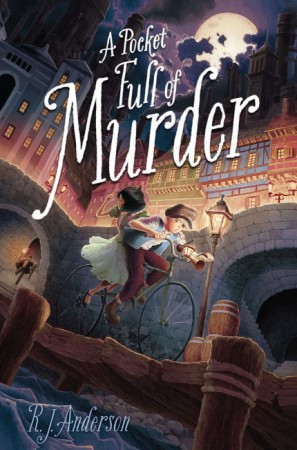 All my protagonists are misfits in some way or another, often painfully so. They’re isolated by their interests and beliefs being radically different from those of the people around them, or by an unusual ability or disability that sets them apart. Isaveth, the heroine of A Pocket Full of Murder, is doubly disadvantaged by being poor and part of a persecuted minority. But she refuses to let that keep her from fighting to uncover the truth and protect her loved ones, which is a good thing, because otherwise there wouldn’t be much of a story!

​Some might complain that The Lord of the Rings isn’t technically children’s literature, but I first read it as a child, so I’m going to say Eowyn. She goes through some terrible, even shattering experiences but she also shows tremendous courage and strength when it counts — plus she ends up with Faramir (the book version, NOT the movie version, please!). And I’d love to be that good at riding and wielding a sword…

Some readers complained that the last section of my YA psychological thriller Ultraviolet seemed a bit sketchy compared to the earlier part of the book. I had specific reasons for writing it that way, but in hindsight I don’t think that came across as well as I’d hoped, so I’d probably slow it down and expand it if I were writing it again today.​

(I regret nothing about the plot twist, though. That was the plan all along.) 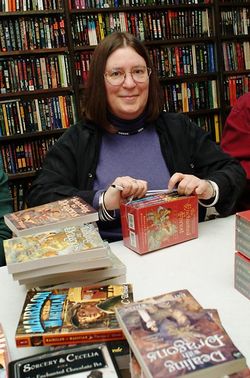 ​It came from one of my earliest writing mentors, Patricia C. Wrede (left). Whenever the other writers in our online group would start talking about the “best” methods or rules for writing a good novel, she would quote Kipling: “There are nine and sixty ways / of constructing tribal lays / and every single one of them is right!”  I often remind myself of that when I start feeling insecure about not being as fast or seemingly efficient as other authors. Everybody’s writer brain works differently, and no method that results in a finished and publishable book is a bad one.

(To the right)’s the not-really-an-office where I’ve written the last six of my eight novels — a chair in front of my bedroom window, with a TV tray to hold my laptop (when it’s not on my lap) and any notes I 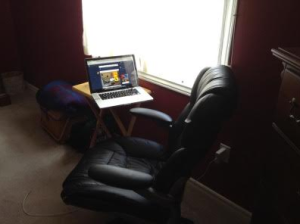 might need for the book I’m working on. It’s not ideal, and I’d love to have a proper writing space some day, but with my husband, three boys and two elderly parents living with me there’s only so much room in the house!

When I get an idea for a book, it’s usually in the form of a character, who has a problem to solve. It might be a disadvantage she’s trying to overcome or a crisis that she has to deal with (usually it’s both), but that gives me the genre and overall shape of the novel. It’s also crucial for me to find the right names for my main characters before or very shortly after I start writing, because that tells me a lot about who they are and how they’re likely to behave. That may sound strange or even silly, but I once got stuck on a book for two years because the heroine had the wrong name and I didn’t know how to write her until I found the right one!

I spend a few weeks mulling over the story and making a lot of messy notes about it, as well as reading up on any background information I might need to create the world in which my characters live — I did a lot of reading about the Great Depression and Canadian history when building the world of A Pocket Full of Murder, for instance, even though it’s technically set on an alternate Earth that has magic and a lot of the details of history, culture and politics are different. When I have some idea of what the story’s about and where it’s going, I sit down and start to write.

I write my first draft slowly and with lots of self-editing and backtracking, because I’m basically thinking it all through on the page; but on the plus side my finished drafts usually read well, even if there’s still plenty of room for improvement. I get feedback from my editor and/or critique partners, the more frank and detailed the better, and then I mark up the manuscript like crazy and start over again, typing it all in from scratch and rewriting huge chunks of the book as I go. Generally it takes me 4-6 months (though it can be as long as 8 months) for the first draft, and 6-8 weeks for the revision.