Our guest: Author Susin Nielsen’s 2012 novel, The Reluctant Journal of Henry K. Larsen, won the Governor General’s Award (Children’s Text) among many other awards; her latest, We Are All Made of Molecules, was released just a few short weeks ago. (Read our review.) She started her professional writing career on television, writing for Degrassi Junior High. She lives in Vancouver, British Columbia.

Please note: There are some swear words used in the interview, so if you are using this for educational purposes, please read before doing so. 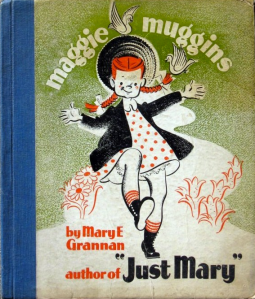 My earliest memory is of my Grandma reading me the Maggie Muggins stories. Not a lot of people remember these. I believe they were Canadian. Maggie had wonderful adventures. I think she lived on a farm, or near countryside. At the end of every book she would say, “Tralala, tralalee … I wonder what I’ll do tomorrow?” I loved those books. I was completely transported.

A cross between Max from Where the Wild Things Are and Harriet from Harriet the Spy. They were not perfect children. They were naughty. Max told his mother he would eat her up, but Mom still loved him at the end of the day. They both had vivid imaginations. Harriet was no girly-girl. Sometimes she was mean. She wanted to be a writer. I love both of those books to this day. I didn’t realize until recently that they both shared an editor, Ursula Nordstrom, who published “good books for bad children.” How perfect is that.

Oh my heavens, that’s tough! Certainly the person who influenced me profoundly growing up was Judy Blume (left). Hers were the first books I read where I felt, “I’m not alone.” And I think I do that with my books, too. In more recent years I have fallen in love with Christopher Paul Curtis’s books (especially Bud, Not Buddy) and Susan Juby’s books.

Well, let’s see. If they have to be from the world of children’s literature, I would choose 1) Ursula Nordstrom, because I am reading her book of letters, Dear Genius, and she published many of the people I’ve mentioned as being favorites. 2) Carl Hiassen because I just think he’d be so entertaining, and I think he counts because he’s written YA. 3 & 4) Could I please invite

David Sedaris and his boyfriend, Hugh Hamrick? I know he’s not a children’s writer but I adore him, he’s my favorite writer, and I would love to meet him. I think he would be kind and funny and generous at a dinner party. So I guess that counts as two. 5) Lastly, I would invite Winnie the Pooh.

6. IF YOUR OWN WORK HAS A DEFINING CHARACTERISTIC, WHAT WHAT IS IT

Oh, god. Well, so many bad things happen to a lot of characters, don’t they? I mean, who would really want to be any of Roald Dahl’s characters, even if things turn out well for them in the end? Or Harry Potter, whose parents are both dead? I wouldn’t want to go through what most children’s literature characters go through! So perhaps I would pick Tigger from A.A. Milne’s books, because he is such an eternal optimist. Or maybe Christopher Robin.

I thought a lot about this question and I think the only honest answer is, “Nothing.” This is not because I think my work is perfect – far from it. I make a point of not reading my books again once they’re published (except for the odd excerpt in a school visit or reading) because I’m sure I’ll find all sorts of small things that I wish I could change. And the thing is – you can’t. So, why live with that sort of regret? There’s nothing you can do about it – better to look forward!

And, all of that said, I did think of one small thing! In “Dear George Clooney” I used the expression “Obama bump,” because it was popular at the time. I wish I could just say “fist bump” now. I try hard to keep in mind that slang doesn’t last, but I blew it there.

It was a couple of years ago, hearing Junot Diaz (right) speak at the Vancouver International Writers’ Fest. He said, “Sometimes you can be good at something that you also find really hard. Sometimes, to be good at something, you just keep having to show the fuck up.” I thought that summed up what a writer does so brilliantly. It is so hard, every

single time, but if you keep showing the fuck up, you will eventually get it done!

My photo isn’t great because I have a huge window that I look out of, which I love. But you get one of my two cats in the photo, at least! I do my best writing in the mornings, for sure.