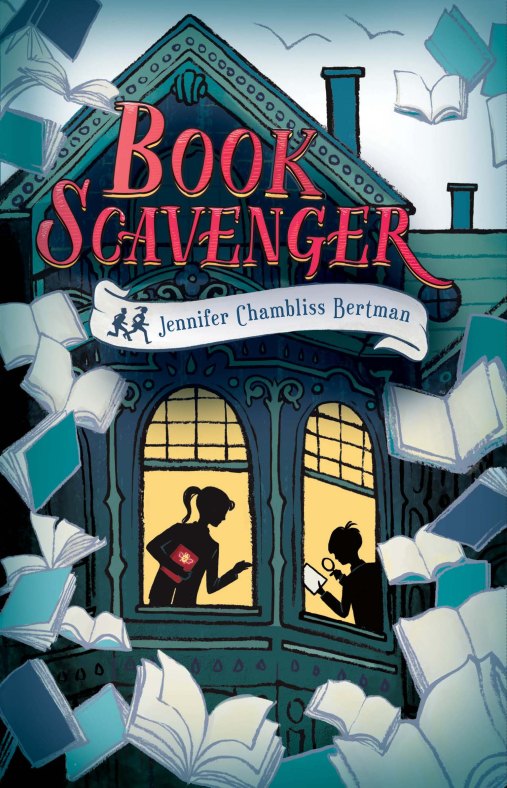 Jennifer Chambliss Bertman’s debut middle grade novel, Book Scavenger, is the sort of thing the book nerds crave: A literary-reference-peppered mystery set in one of the most important literary cities in the world, San Francisco; at one time or another, Edgar Alan Poe, Jack Kerouac and Robert Louis Stevenson all called the City By the Bay home, and Bertman makes good use of many of them in her story. It also involves a literature-based game that many will probably go to bed dreaming about once the get tucked into this book.

Setting her story in San Fran (this is not what the locals call it…) may well have been the author’s best choice, in fact. I’ve never been there, and have never harboured any particular desire to go, but this book may have changed that; Bertman’s depiction of the city is marvelous and mouth-watering, and –combined with the opening credits to Full House, now on Netflix– I think gives me a pretty solid feel for the city.

The story is of a young girl named Emily whose family is on a constant, self-imposed mission which forces them to move every year or so, making it difficult and essentially pointless for her to put any effort into making friends; they move to San Francisco just as her hero, Garrison Griswold –book publisher and creator of Emily’s favorite game, Book Scavenger (a sort of web-based book treasure hunt)– is attacked and hospitalized with life threatening injuries while on his way to a press conference to announce his latest creation. Emily and James –the boy who lives upstairs from her, whom she hesitantly befriends, becoming her first new pal in many a year– discover a mysterious bound edition of a Poe story called The Gold Bug near where the attack was perpetrated, and figure out over time that it was the beginning of Griswold’s intended new game. They set about decoding the ciphers and unraveling the clues set out, traveling throughout the city set upon by a pair of thugs intent on retrieving the book, but for whom remains unclear.

Bertman shows herself to be a remarkably good writer, with an excellent eye for detail and a phenomenal knack for plotting.

Adults reading Book Scavenger may look back at the mystery in the book when finished and think it a bit slight –there are really only four or five clues to solve throughout– but then again, this is not a book written for adults, and the intended audience (middle graders) are very, very likely to get swept up in the action of this well-paced page turner. There is quite a bit of coincidence in the plot (who Babbage turns out to be is especially far-fetched, and while most of us will probably go our entire lives without meeting anyone obsessed with ciphers, Emily can’t seem to go to the bathroom without tripping over one), but here again we get into questions about what is acceptable for a middle grade novel versus an adult one, and this would have to be considered another grain of salt, so to speak; it certainly doesn’t diminish the novel by any stretch of the imagination, and at no point does anything feel lazy.

There are some great and unexpected surprises in terms of character; for instance, the futile bitterness a child feels when parents make choices without consideration, the trepidation that comes with making a new friend, and especially the resentment and residual fondness that lingers between formerly inseparable siblings as one outgrows the other. The relationship between Emily and her older brother and ex-book scavenging partner, Matthew, is perfectly appointed.

When I closed Book Scavenger finally, I was sad, but with a smile on my face, which must be the aim for any author. I didn’t want it to end, but then it didn’t overstay its welcome and I was satisfied with the conclusion. It was perfectly satisfying. And I must say, even though I found a few minor quibbles (see above), when the book ended they were wiped away, and I was left with nothing but contentment with what I’d just read; often when I read MG or young adult fiction (or adult fiction for that matter), these sticking points do just that: They stick and bring down my overall impression of the work. This was not the case here, which is a testament to just how good Book Scavenger is as a whole.

It’s hard to judge what the publisher’s expectations for a book are upon its release, but it would be unsurprising to see Book Scavenger become a massive success in the long run; it seems the sort of book that will get passed around from one impressed reader to another, who then tells their friends about, and so on and son and before long we have a cult following on our hands.

Jennifer Chambliss Bertman has two more books in the pipeline; I am sincerely intrigued by what she brings to the table and what will come next. She is a potential powerhouse in the world of children’s long form fiction, and with Book Scavenger she has put all other MG and YA “mystery” writers on notice: There is a new voice in town, and the watermark just got a little higher.

Kinderlit.ca requested and received a copy of Finding Serendipity in return for an honest review. Read about our review policy HERE.

Normally we don’t do publicity in our reviews, but I want to also draw attention to Jennifer Chambliss Bertman’s fantastic blog, which can be read HERE.