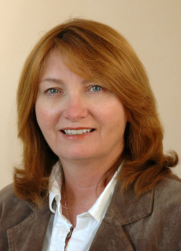 Our guest: Loretta Ellsworth is based in Minnesota. She was a late-comer to writing, not writing her first novel (2002’s The Shrouding Woman, from Henry Holt) until she already had four children. Her latest book, Unforgettable, was released in 2011 by Walker Books, and her 2007 novel, In Search of Mockingbird has been newly re-issued by Henry Holt.

My parents had a big book of nursery rhymes which made its way through all seven of us kids, losing its cover in the process.  She read it to each of us and I memorized most of the rhymes and loved the pictures in that book.

I loved the Little House books and identify with Laura; she was plucky and loved her family, and never lost her pioneering spirit.  Plus, my great-grandmother lived near Laura Ingalls Wilder as a child, and most likely attended school with her sister Carrie.

I have many favorites; it would be too hard to list just one.  EB White (Charlotte’s Web), Mary Norton (The Borrowers), Natalie Babbitt (Tuck Everlasting) are just a few.  Some of my favorite illustrations are by Dr. Seuss, Chris Van Allsburg, and Marla Frazee.

I’d love to sit in on a meeting of the Inklings where J.R.R. Tolkien and C.S. Lewis met, but it was an all-male club, so I’d have to come in disguise. (Editor – Dorothy L. Sayers was an occasional visitor to the Inklings meetings, so you might have a chance!) The Oxford pub where they met would be a great place to eat, I’m sure.

The story is the most important facet of children’s literature, which is to entertain.  Finding the best way to tell that wonderful story is the challenge.

Much of my writing is about acceptance, learning to embrace who you really are.  With so many books and magazine articles promising a ‘new you’ it’s no wonder young adults struggle for acceptance.

I’d love to be  fourteen year-old Arrietty from The Borrowers and live behind the walls of an English house.  Or  I’d come back as Trixie Belden and solve mysteries between sets of tennis.

There would be too many to name.  But I do wish I’d started writing books earlier; it took me many years and a circuitous route to become an author.

Butt in chair. Meaning that you have to show up every day and do the work, which may explain why it took so many years before I became an author.

When I was working as a teacher I developed a very loose style of working and wrote whenever and wherever I had time; thirty minutes here and there, during my child’s soccer practice, early morning, or late night.  Now that I’m not teaching I have more of a schedule and I try to write every morning, but I still the like the flexibility of working at different times and in different spaces.  Sometimes I have help, as you can see in my pictures.

11. WHAT IS YOUR FAVORITE CHILDREN’S BOOK AND WHY?

My favorite book is To Kill A Mockingbird, which isn’t really a children’s book, but is often read in high school.  The writing is scrumptious, and I learn something new every time I read it.  I also love Green Eggs and Ham, by Dr. Seuss.  It’s just so fun.