There has of late, thankfully, been a rash of children’s books with a strong emphasis on female empowerment. Shannon and Dean Hale’s The Princess in Black is one great example. The Detective’s Assistant, by Kate Hannigan, is another. And the favorite in our house is Andrea Beaty’s Rosie Revere, Engineer.

We have a spirited five year old (she’d want me to specify five and a half) girl, and it’s of grave importance to us that she grow up knowing that being a girl isn’t a hindrance but rather a gift and a strength, so whenever we go to buy books, there’s usually at least one in the stack with a strong female protagonist. The problem with these books, often, is that they’re Message Books, which in itself isn’t necessarily a bad thing, but Message Books tend to lack a certain… Nuance?

Our daughter doesn’t want to be read a lesson, and we don’t want to read one to her. She wants a story, and we want a conversation starter; we don’t want a book that says “Don’t underestimate girls, because girls can do anything!” We want a book that sets us up to say “So, why do you think that character underestimated her? Do you think that was fair? Why?”

Deborah Underwood’s latest is one such book. It’s the story of Cinderella, transposed to outer space, and replacing Disney’s enduring yet whimpering heroine with a little girl of great strength and a solid idea of herself. The handling of the Cinderella story owes a lot to Marissa Meyer’s young adult novel, Cinder, whether conscious or by coincidence, but no matter: It’s a great set-up.

There’s the requisite evil stepmother, the evil stepsisters, the ball, the fairy godmother, but it’s all tipped on its head. The godmother is a robot. The ball is gravity-free. Cinderella is a fledgling spaceship repairperson. The Prince of the story doesn’t even fall for Cinderella because of her beauty; he is smitten with her ability… But Underwood doesn’t bog down in proving how clever she can be with reinventing the source material; she sets up the .

There is a moment towards the end which I was dreading as I saw it coming: The traditional marriage proposal. You know how it goes: The Prince finds the girl who fits the slipper (in this case, a space wrench) and takes her as her bride, saving her from her life of misery, and Cinderella, with hearts in her eyes just from being near a real prince, gratefully accepts! But Underwood skillfully sidesteps the awkwardness, and nods toward the creepiness of how the story is supposed to go. This is a girl who wants a career. 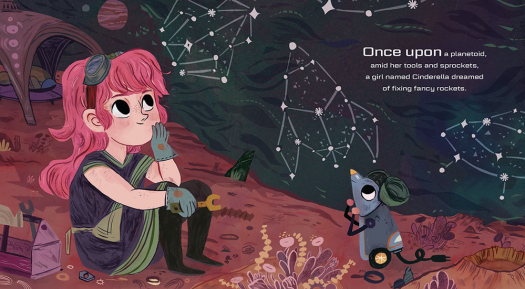 Meg Hunt’s illustrations are stunning. They are very dark, in contrast to the brightness of most kid’s picturebooks, but this works to the story’s benefit. She’s created a world. (My single complaint would be that, when the Prince’s spaceship breaks down, the smoke kind of blends into the rest of the picture; it took us a second to see what the problem was… But that’s the definition of splitting hairs!)

Her style is reminiscent of folk art. It looks like paint layered upon paint; I suspect, of course, that it’s digital, but if it is, it’s exceptionally well done in that it doesn’t read as digital. Interstellar Cinderella is her first picturebook, which in itself is remarkable. (That said, she’s by no means a newbie; her CV is impressive.)

It would be a mistake to consider this a book for girls, and, arguably, it’s even more important for boys to be exposed to this message when they’re young. Regardless of the gender of your child, your bookshelf can only be enhanced by the inclusion of Interstellar Cinderella.

Kinderlit.ca was provided a copy of Interstellar Cinderella in exchange for an honest review. For more info on our review policy, read THIS.